The Progress of Technology: How Far Have We Actually Come?

Human endeavor seems to know no bounds. Not only are we living in the most peaceful time of recorded human history, we are more technologically advanced than ever before. Our energy sources are more efficient overall, computers more powerful, and medicine more beneficial than could have been predicted 150 years ago. And we’re progressing at an exponential rate. This means that the technologies that humanity is researching and perfecting are themselves creating opportunities for further expansion and a capability to bring about the next stage of that technology. This phenomenon is known as the Law of Accelerating Returns, as first outlined by renowned futurist Ray Kurzweil.

A quick look at the timeline of human invention shows how far our technologies have progressed, and how the speed of change has increased. Around 200 years ago the first primitive electric generators were made. 100 years later and the first televisions were created. Barely more than 50 years after that, the first home computers were released, and only 13 years later the internet was created. We now live firmly in the internet age. To put this in some perspective, it took early humans around 5000 years to progress from the first forms of agriculture to the invention of the wheel. Only 66 years passed between the first powered aircraft flight and humankind setting foot on the moon.

What does this ever-increasing rate of technological advancement mean for us as a species and our future?

The Rate of Progress

In Kurzweil’s 2001 paper on the Law of Accelerating Returns, he stated that, ‘we won’t experience 100 years of progress in the 21st century — it will be more like 20,000 years of progress (at today’s rate)’ This is certainly an intriguing prospect, but what are some of the areas where this exponential growth is most apparent?

Progress in terms of renewable energy sources has increased in recent years. They are more widely adopted, cheaper to install, and more efficient than ever before. As Ray Kurzweil recently outlined; solar panels will power the world in the near future. The cost to produce them will continue to decrease exponentially, whilst their effectiveness will increase. This means that the development towards 100% renewable energy sources is within our grasp.
The impacts of this are potentially huge. Not only will we be on the path to reducing further damage to the environment, it means that cheap, clean energy will be in the reach of everyone. In the long term, could this make the sci-fi concept of a Dyson Sphere more than just an obscure theory?

One of the most famous examples of the exponential growth of technology is Moore’s Law. This states that the number of transistors per square inch on an integrated circuit has and will double every year since their invention. This means that computer processors become smaller and faster at a faster, and faster rate. The more advanced the technology becomes, the more power we have to advance it. Of course, there are eventual limits to this progress. Kurzweil predicts that a new paradigm of more powerful processors will be conceived in order to continue the speed of progression, just as how integrated circuits replaced single transistors.
This progress of computing technology means there are potentially huge impacts to our species and our understanding of our place in the universe. As artificial intelligence becomes a very real prospect. Our lives, and even our bodies, will become enhanced by computers of all kinds. This, ‘human-machine’ civilization Kurzweil expects us to soon reach will be more intelligent and resilient than ever before.

As our technology continues to rapidly develop, we will make huge strides towards longer lives and even forms of immortality. The cost and speed of sequencing an individual’s genome has decreased considerably in the last 10 years. In 2006 it would cost around $14 million to sequence a draft of a human’s genome. In 2016 it was estimated to cost around $1000.
With the ability for an individual to have their entire genetic code sequenced, medical care can potentially be tailored to perfectly suit an individual. This emerging field of Genomics will see illnesses such as cancer, infectious, rare, and common complex diseases being targeted based on genetics. With this greater understanding of humans’ DNA, aging processes at a cellular level can be understood and potentially even halted.

Interplanetary Exploration – Mars and Beyond

It’s estimated that humans will reach Mars in the 2030s. This will be the first step in an ongoing campaign to explore our solar system. Europa, the largest moon of Saturn, is speculated to have liquid water below its icy surface. Astronauts eventually will have the opportunity to explore this planet-like moon and search the depths of the water for any potential signs of life. The discovery of life at such a distance from the sun would have major implications for the prospect of life in other solar systems and other galaxies.

What Does the Future Hold?

The possibilities that exponential growth of technology holds are endless. Critics of Ray Kurzweil’s theory focus on the possibly illogical comparison he makes between biological evolution and technological evolution. However, regardless of whether Kurzweil’s predictions come to pass (as many so far have), it’s clear that the speed of technological progress has increased. Whether or not it continues at such a rate will be seen in time, but what’s certain is that we will continue to develop technology and increase our understanding of the universe and our place in it. Our energy will become cleaner, our computers more advanced, and our healthcare more successful.

The Power of Intention: Can We Actually Influence Our Own Reality?blog-posts, Featured Left 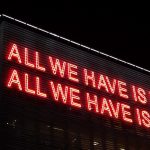